Empark manages the car parks of 18 airports in Spain 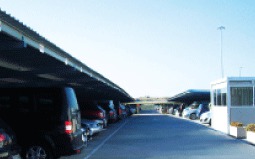 The duration of the contract is 5 years and is automatically extended another 2 years on the basis of a high quality service.

After several negotiations for both lots, in which aspects such as economic investment, experience in technological developments for parking management , technical supply and other services were considered and following the hard work of our technical and commercial teams  Empark secured its presence in the following  airports Asturias, Bilbao , A Coruña , Fuerteventura, Gran Canaria , Jerez , Lanzarote , La Palma , Madrid / Barajas , Pamplona, ​​San Sebastian , Santander, Santiago , Sevilla , Tenerife Norte, Tenerife South , Valladolid and Vigo.

With the award of this contract Empark are fast becoming one of  Europe’s main operators of airport parking , besides those already mentioned in Spain , Empark manages all the airports in mainland Portugal, as well as London Stansted Airport and Edinburgh Airport Scotland , adding to more than 110,000 spaces in European Airports.